Liz Rawlinson, who has an MEng in civil engineering, University of Bristol and is a Chartered member of the Institution of Civil Engineers and was nominated for Young Project Professional of the Year, APM Project Management Awards 2016 and currently works for Skanska as a site agent. Charles Orton-Jones interviewed her for Project. 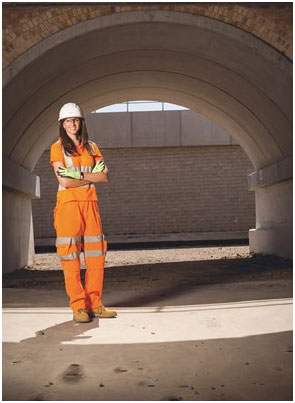 Liz Rawlinson’s ability to adapt to change and solve problems was tested to the limit for her role managing the Bermondsey Dive Under project.

If there’s a secret formula to being a world-class project manager, it surely includes the ability to adapt. Throw a top-flight project manager into any situation and they’ll dream up solutions to get around any obstacle.

Liz Rawlinson is a perfect example. She only graduated in 2010, yet time and again she has proven herself to be a master at adapting to change. Her biggest triumph has been her management of a major section of the £70m Bermondsey Dive Under project, part of Network Rail’s Thameslink programme.

The project was conceived to allow slow trains to travel from the South East to Charing Cross without interfering with fast Thameslink services between Brighton and Blackfriars. A neat over-and-under design solves the problem. Rawlinson’s mission was to prepare the site and begin construction, which turned out to be more difficult than expected.

“The site had a lot of challenges,” she recalls. “When Network Rail cleared the arches of tenants ahead of construction work, it found abandoned vehicles, hazardous waste and bin bags full of rubbish. We had to clear the site before we could even start.”

It turned out to be riddled with a more noxious substance – asbestos.

“There were also heavy metals and oils in the ground, and fly-tipped waste strewn everywhere,” Rawlinson says. “My role morphed into managing the waste removal.”

She’d never done anything like it: “I was thrown in at the deep end, so I trained myself. I worked through problems as they occurred, got advice and picked it up as I went along.”

Asbestos is a difficult issue to deal with. Rawlinson learned that it’s a threat not only to health, but also to projects: “The big problem is that it’s not just a waste issue, it’s a health-and-safety issue. You need to call in experts and shut down areas of the site. We lost two months on the programme at one point.”

Nothing was easy. As the dig continued, there were more obstacles, she says: “To start the piling works, we needed to remove the concrete foundations of an existing bridge abutment after demolition. We went down 10m, still finding obstructions, before realising it was not going to work. We ended up redesigning the piles for the new structure. Events like this can have a huge impact on the cost and programme.”

As things got more complex, Rawlinson found herself under pressure. Colleagues came to depend on her updates. It got to the point where she was overloaded with queries. It was time to come up with some ingenious fixes.

“I’m a very visual person,” she explains, “so I created a room that acted as a live-update centre, with maps showing stockpile storage, tables of testing progress, status of waste-removal procurement, and a run-down of the priorities for the coming week. People could see the status of each element in the project, and I held really productive progress meetings in that room. I nearly became a graphic designer, so it felt natural for me to work in this way.”

As hiccups created delays, she worked hard to get the timeline back on track. Again, ingenuity was the key.

“There are always creative solutions,” Rawlinson says. “On this project, we had to build the structures in a certain sequence – but by getting the whole team together in a collaborative planning session, we found a way to rejig the order. For example, we used temporary works to allow us to complete some lower-level piling and start bridge abutments while the higher-level piles were being redesigned.”

She juggled staff, resources and programmes to maximise the effectiveness of everyone around her. Gradually, the job moved back on track. The site was handed over to Network Rail on time, while also meeting an ambitious environmental goal – a real success story, which formed the basis for Liz’s entry for the Young Project Professional of the Year category at the 2016 APM Project Management Awards.

“We diverted 99.5 per cent of waste from landfill, which was helped by the huge amount of excavated material we reused on-site,” she says. To cap things off, the site was planted with wild flowers, increasing biodiversity by 13 per cent.

Rawlinson is bursting with ideas on how to be a better project manager. She is an advocate of mentors, “both official and unofficial. It’s too easy to get stuck thinking about the work in front of you. A mentor will challenge you to think about things from new perspectives.”

She advocates hunting down the right people, whenever they are needed: “There was a great waste manager in head office, so I was on the phone to her regularly. I learned early on that if you aren’t sure, ask. She recommended I talk to suppliers and other experts. That’s how I kept learning, and now engineers within the company call me for practical waste management advice.”

It seems that Rawlinson was born to be a project manager. She radiates enthusiasm for the profession.

“I like being outside,” she says. “I like the day-to-day challenges and making things happen. Early on in your career, you can be master of your own destiny and be responsible for people. Even as a student, I had responsibility for whole sections of work. I fell in love with that.”

Charles Orton-Jones is a business journalist and editor